The following entry about Mattie, Talbot and their family was researched and written by Carolyn in February 2013

Although the information on Mattie’s marriage record is very clear no information about her childhood and parents James Stacks and Emma Parks has been found in early 2013.

After Mattie and Talbot’s marriage on 19 March 1907 they moved west to Spokane, WA where their first two offspring John and Ruth were born. According to the city directories Talbot’s jobs included being employed the Union Laundry, a warehouseman and then clerk at the Spokane Paper and Stationery Company and finally in 1913 as a ‘carman’.

The family had returned to Cleveland by March 1914 when Paul was born.  Talbot was not required to registrar for the 1914-1918 war draft until the final call up on 12 September 1918, just two months before the war ended. 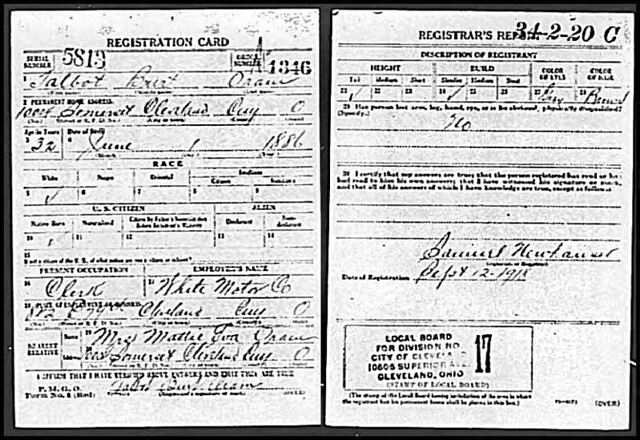 The card shows that Talbot was a clerk working at the White Motor Company.

There is no sign of the family in the 1920 census.  In 1921 the Cleveland directory they are living on Ostend Ave while Talbot was  a foreman and Mattie a cashier, by the 1925 directory entry Talbot was a ‘record supervisor’ living on Shaw.  In the 1930 census return they are living on North Taylor Road and 44 year old Talbot is a supervisor at an auto-mobile company, though there is no indication that this is still the White Motor Company.  Within five years they had moved to 737 E118th, the house where Talbot’s mother Henrietta had been living since before the death of Talbot’s father James in 1917.  They were to live with Henrietta for the last five years of her life and continued to live in her house until after 1945, though were not included in the 1940 census. 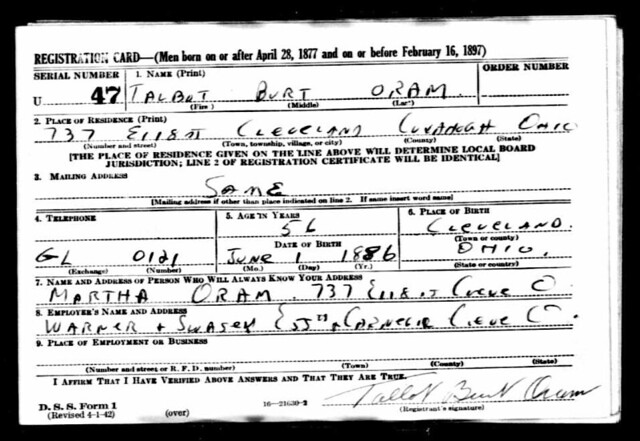 The USA officially entered World War II on 8 December 1941 following an attack on Pearl Harbour, Hawaii. Talbot’s registration card  has been published as he was part of The Fourth Registration, often referred to as the “old man’s registration”, that was conducted on 27 April 1942 and registered men born on or between 28 April 1877 and 16 February 1897 – men who were between 45 and 64 years old – and who were not already in the military. The cards completed during the first three registrations are not available in 2013 as they are still subject to US privacy laws.

Talbot’s card shows he was working for Warner and Swasey a company that manufactured machine tools and telescopes.

It seems as if  the family found life very difficult during the 1920s and particularly during the depression of the 1930s.  Talbot followed his father’s pattern of never settling at one address for long.

Talbot and Mattie retired to Florida where Mattie died in 1957.  She was buried in Lake View cemetery, Cleveland in the same lot as Talbot’s parents James and Henrietta Oram.