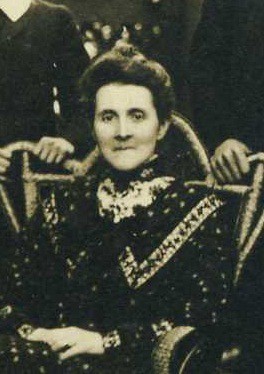 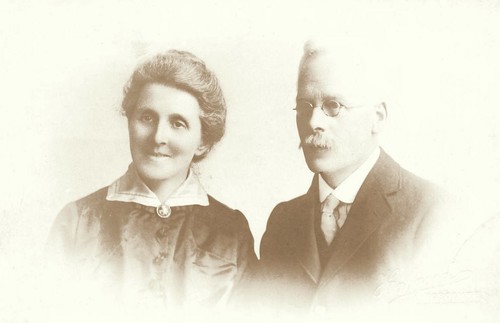 Born at Burrishoole, April 9th 1865, third surviving daughter of John and Jane Oram. Educated at Broadbridge Heath School (the village school near Climsfold) and at the school of the Misses Brown at Westport, Co. Mayo.

When the family had settled at Charity Farm Lovington, she was apprenticed with her sister, Caroline to the drapery at Glastonbury in 1883. In 1886 she obtained a post at Salisbury where she met Alfred Hinxman, whom she married in 1892. The photograph of this wedding is in the front of this saga. She led an active life until the age of 88 when she fell ill, dying on April 2nd, 1955, one week before her 90th birthday.

She was a true Oram and was never so happy as when filling all available bedrooms with her brothers and sisters and their families. She loved talking about her early memories of life in Ireland and later at Lovington. She was valiant for the right and her favourite sayings were “Rather die than tell a lie”, “Dare to be a Daniel” and “Never put off till tomorrow what you can do today.” Her favourite hobby-horse was total abstinence and her young relations had to submit to fervent warnings against the “devil’s broth”. Her religion supported her in all things and she was deeply, if somewhat narrowly, concerned with the life of the spirit. She could be easily amused and almost to the end of her last illness, she would laugh delightedly at little jokes. At the very end, her mind went back to her childhood and almost the last thing she said was “I am the last of ten children and they are all asking where Emma is.”

Emma’s daughter Lily was the main source for this entry in ‘The Oram Family Saga’ compiled by Daphne Oram in the 1970s.