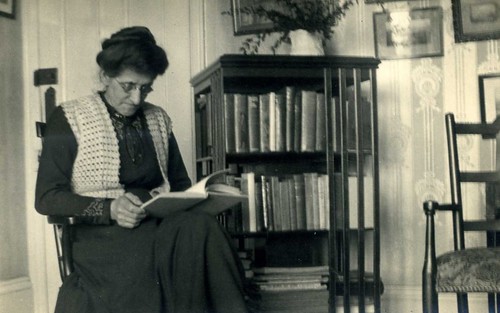 Died: In 1947 at Glastonbury, Somerset, England

Second surviving daughter of John and Jane Oram born at Burrishoole in 1863, 7th June.    She went to school at Derrada, Broadbridge Heath village school and Miss Brown’s Academy, Westport.   Her sense of responsibility and capability in household matters made her her mother’s right hand and she helped to look after the younger children. At the age of 18 she helped to superintend the move to Lovington and went over in advance with her mother and father to get Charity Farm ready for the arrival of the young ones who had been left at Wilford in charge of Jane. She was apprenticed to Mrs. Bestwetherick, a draper of High Street, Glastonbury and became engaged to Thomas Hann. They married and lived in one of the new houses lately erected behind the High Street where they remained all the rest of her life. 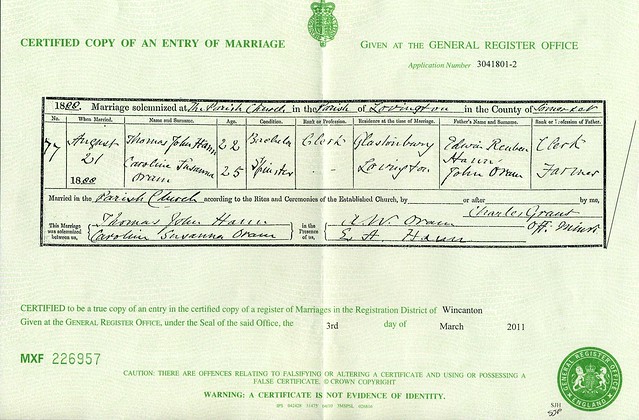 Tom & Caro’s Marriage Certificate. Caro’s brother Alfred would have travelled from Ireland to witness their marriage.

Her interests were looking after the house and family, entertaining the young and lonely to lavish teas and running the missionary staff at St. Benedict’s annual bazaar. She was a staunch Anglican, abhorred sin, upheld the right but could collapse surprisingly in silent, delighted mirth. Her hair remained long, black and lustrous as in the days of her youth, coiled round her head and her clothes stayed at a sort of modified Edwardian. Though never robust she lived to over 80 and was carefully tended in her old age by her daughter Mary.