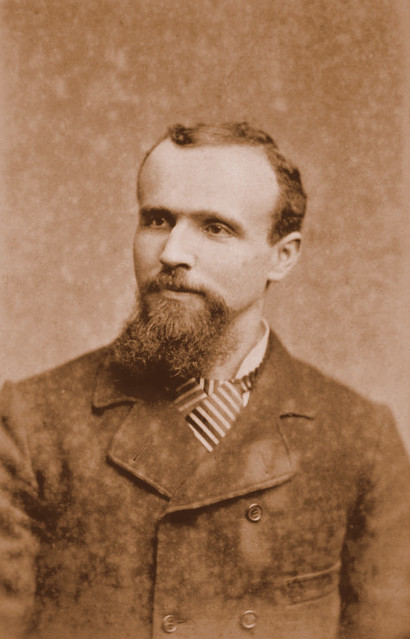 1960’s source for James’ life in Cleveland was his grandson Paul Oram. The 2012 version is much more extensive. It includes all the limited oral history mentioned in the Saga, so only the updated version is given below.

In the early 1960’s when Daphne started collecting information for The Saga the name ‘James Henry’ evoked just two responses. Firstly that ‘he was the brother who became an alcoholic and was sent to The States to be looked after by his eldest brother’ and secondly, that ‘he was charming and fun and his mother’s favourite’. His nephews and nieces agreed that when they met James on his occasional visits to England he was a lovable and happy uncle. Later Daphne met James’ grandson Paul Oram who added that James went to College in Dublin, married a French Canadian, travelled for The Heating and Ventilation Federation and became a custodian for the YMCA in Cleveland. Although Paul was three or four years old when James died he still had a recollection of his grandfather ‘sitting in his black leather chair with a scant fringe of hair and a large bald pate‘.

Looking through James’ father John’s diaries James or “Jemmy” was mentioned more times that his brothers. One is left with the impression that John would have preferred Jemmy rather than Arthur to have continued his farming and land agent interests in Ireland.

James was the second of John & Jane’s children to be born in Ireland. In a rare show of emotion John had recounted Charles Somerset’s ten month’s struggle to survive, finally dying on 11 May 1856. John & Jane must have been very concerned when eighteen month old James was taken ill.

While James was growing up his father was interested in the latest developments in agricultural science and on the occasions he visited Dublin sometimes went to the model farm at Glasnevin. In fact by then the farm had been developed into the Albert National Agricultural Training Institution that later on James attended for two years:

The records for Albert College are held by University College Dublin.  We are lucky that James was one of the few students the college authorities commented on: 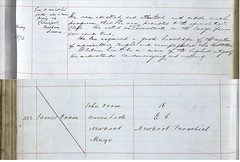 May 1874: “Gone to assist his father who is now farming at Clinsfold, Horsham, Sussex.

He was so steady and attentive and made such progress that he was promoted to the special agrt. class. He acted as one of the assistants on the large farm for some time. He has acquired a good knowledge of the systems of agriculture taught and exemplified at this institution. I believe him to be a man of the highest integrity. He understands land surveying and mapping.”

Why did James leave Albert College? John had a series of bad harvests in Clinsfold so he may have been unable to pay James’ fees, if they were required or John needed help on the farm. Was the demon drink starting to rule James’ life? We do not know what James did between the family returning to Ireland in 1877 and 1881 but he must have been living away from home as John notes six visits by Jemmy to Burrishoole. Finally the day came when Jemmy left Ireland for Cleveland, long remembered by his brothers and sisters because his parents were so upset: 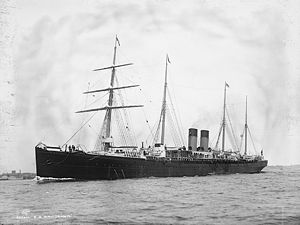 James made the Trans-Atlantic crossing on SS Britannic arriving in New York on 31 January 1881. ” Jas H. Oram” can just be made out on the compound image below taken from the first and second pages of the ship’s passenger list. Unfortunately only poor quality images are available to us.

When James arrived in Cleveland his brother John Samuel would have been busy. John’s business partnership with Edmund Atherton was coming to its end and at home there were five children aged three to eleven years as well as his father-in-law and brother-in-law, Gilbert and William Clark.

Taking the Cleveland city directories as our source we find in 1884 James living close to John’s workshops on River and describing himself as a machinist. Considering that James was an alcoholic it is more likely that John employed him as an odd job man for a couple of years rather then let him operate machinery. 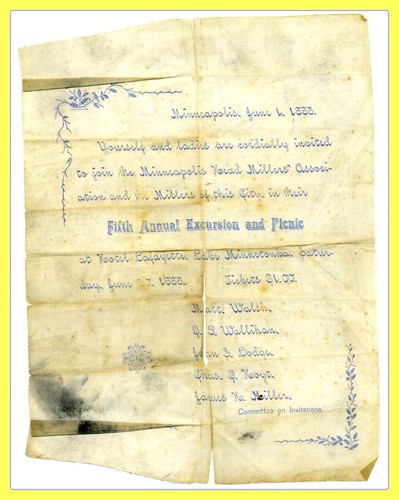 In 30 April 1885 James married Henrietta Burt. When James’ parents died there was amongst their effects an invitation, printed on muslin to the “Minneapolis Head Millers’ Association’s Fifth Annual Excursion and Picnic”. It was said that Henrietta’s family had lived in the Minneapolis area so they may have visited the city a couple of months after they were married. That year James and Henrietta would have joined about 3,000 local workers on the Excursion and Picnic, the city’s brief annual holiday. (see  p160-161 at this link for a description of this event)

There is the slim possibility that James met Henrietta while he was travelling for The Heating & Ventilation Federation which would explain the importance of the invitation and why Paul to had remembered the story that his grandfather had been employed by the Federation.

The growing family moved nearly every year while James was a ‘machinist’ or ‘insurance agent’. James’ brother John was a supporter of the YMCA movement and through his influence James was made custodian of the YMCA building on Prospect. The family had moved to the premises by 1892 and stayed there for about six years. 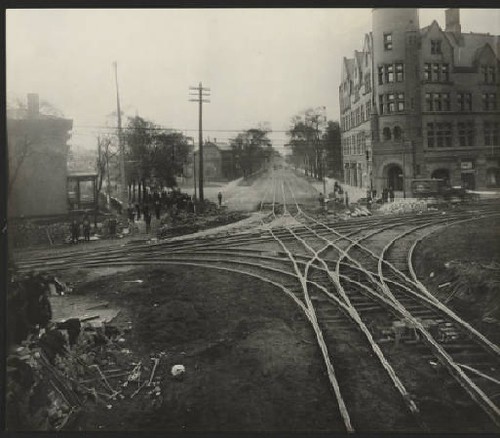 After James’ brother John died in 1913 the directories indicate that John’s alcoholic son Arthur lived with James & Henrietta for a couple of years. James would have been able to give Arthur the support he needed while his siblings were busy with their young families.

James & Henrietta spent the last seven years together living at 737 E 118th .  where Henrietta continued to live during the twenty two years of her widowhood.