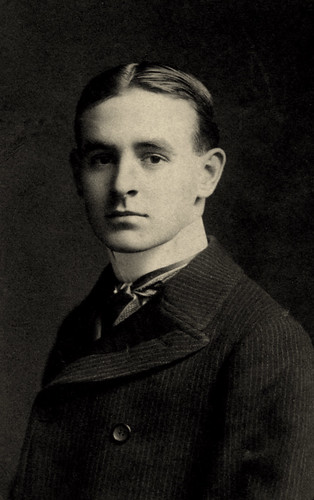 Note this image maybe of Oscar or Talbot, Babs Fox was not certain.

Talbot’s son Paul Oram was the source for his entry in the ‘Oram Family Saga’ compiled by Daphne Oram in 1970. Further information on Talbot’s life is included in the entry for his first wife Martha.

Youngest son of James Henry and Anna Oram of Cleveland, Ohio, who was born in the Y.M.C.A. Building where his father was custodian. Talbott married Martha Stacks – they had three children, John H. Oram, Ruth Oram and Paul Oram.

Talbott worked as a purchasing agent for the White Motor Company. It was this company that made the famous steam car.

His son, Paul, remembers often being taken by his father to watch the movements of the trains and boats and being told how they worked.

When Talbot retired he went to live in St. Petersburg, Florida.  Martha died there in 1957 and in 1963, Talbot remarried a widow, named Nelle Shelton. Talbot died in 1969.