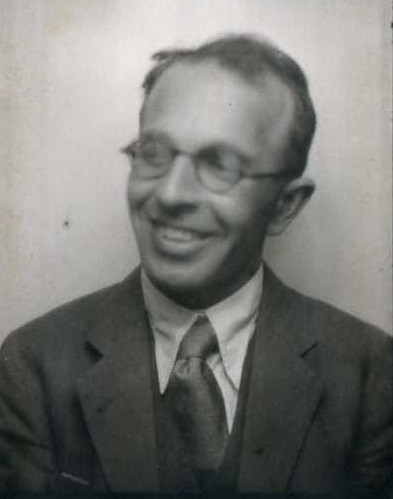 Walter’s entry was written about 1970 by Daphne Oram for ’The Oram Family Saga’.

Only son of Edith Mabel Oram and Walter William Loveridge born at Compton Pauncefoot on July 10th 1894. He was called Knight after the Rev. Knight who was minister at the Methodist Chapel at Lovington.

Walter married Alice Sanders who was born in Oxford, September 13th 1897, daughter of John Sanders of the Old Bank Hotel, Oxford, whose mother was one of the Coles of Winchester.

When I discussed this biography with Alice, she felt that the best tributes paid to Walter were those of his friends in the Press. On his retirement it was said by his colleagues:-

“Mr. Loveridge was held in great esteem, not only throughout the office but in a much wider circle in the City of Oxford —- he took interest in other members of his staff as individuals. He was always willing to lend a hand to people with personal problems I will always remember his innate kindliness and knowledge of Oxford”.

From the Westminster Press at the time of his death:-

“Walter Knight Loveridge, who has died at the age of 74, was articled to the former weekly Oxford Chronicle and worked for the paper, apart from war service from 1915 – 1919 (in the Royal Engineers), until 1924 when he joined the editorial staff of the Morning Post.

He returned to Oxford to become an Oxford Mail sub-editor in the early days of the paper. He retired in 1952.

Outside the office, his main interests were in Oxford History and the Methodist Church. He was a lay preacher and for many years a keen scouter, serving troops attached to Methodist Churches. He was a knowledgeable guide to parties of tourists, and (he preferred to keep this activity to himself) a hospital visitor. He would drop in and inquire which patients in a ward were not likely to get visitors, he would talk to them, run errands for them and see that they had the books they wanted”.

From the Methodist Recorder:-

“Walter Loveridge, prominent Oxford journalist, a former member of the Oxford Mail editorial staff, a member of the Wesley Memorial Church Oxford, combined a number of social activities with his profession.    He was a Scout leader, serving companies attached to the Methodist Churches, a hospital visitor, and since his retirement, a voluntary worker at Oxfam H.Q. Mr. Loveridge was also an authority on local history.     The Minister of the Wesley Memorial Church, the Rev. Donald Rose, described Mr. Loveridge as ‘an honest, free thinking Christian, a most generous man especially to those down on their luck”.

Today his widow Alice values very highly Walter’s numerous friends and relations who help to make life so much easier for her.

They had one daughter.