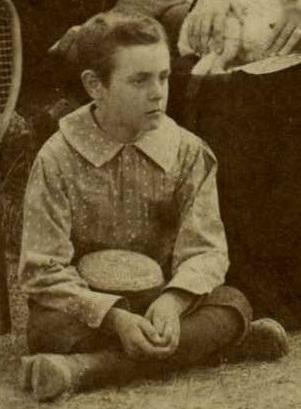 Oscar Talbot Oram, sometimes Oscar S.T. Oram was born at 11, Lyon Street in Cleveland, Ohio, the youngest of five surviving siblings.  At the time his father John Samuel Oram ran an engineering business in partnership with Edmund Atherton.  It would be another 6 or 7 years before the very successful J. S. Oram & Co barrel making machinery business would be established.

In 1887 Oscar and his mother accompanied his father John Samuel on his first visit to the United Kindgom since he had left in 1867.   They stayed with Oscar’s grandparents John Oram 1824-1907 and his wife Jane who had left Ireland in 1881 and were farming at Charity Farm, Lovington in their native Somerset, England.  The diary of John Oram 1824-1907 shows that the three arrived in Lovington on  29 April 1887 and left on 4 August 1887.  During that time all John’s siblings came to Lovington to meet them.   Oscar’s uncle Arthur Oram  travelled from the West of Ireland; his diary entry for 28 May 1887 was “Met John after 20 years absence in America, his wife and second son”.   There is some ambiguity about how they travelled home, but if  we assume two errors by the shipping clerks then Oscar and his parents took the SS Alaska out of Liverpool and arrived in New York on 15 August 1887. 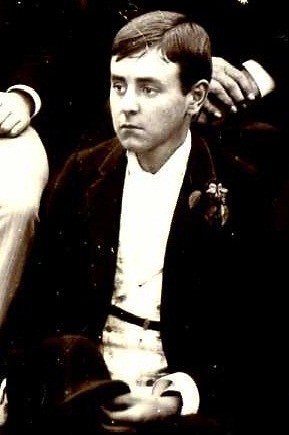 In 1892 the whole family except Arthur made the transatlantic voyage to attend the marriage of Oscar’s aunt Emma Agnes Oram to Alfred Hinxman on 12 August at Lovington.  They travelled on White Star Line’s SS Teutonic arriving in Liverpool on 13 July.  The diary of John Oram 1824-1907 includes:

14 July: John & James & 3 girls from America. James was Oscar’s uncle James Oram who lived in Cleveland. It is odd that John did not mention his grandson Oscar at this point.
25 July: John and family left for London & Paris.  Maybe Oscar was in Paris.
12 August: Emma married to Alfred Hinxman
6 September: conveyed the Americans to Evercreech Junction. Evercreech Junction was a major rail junction just 8 miles from Lovington. 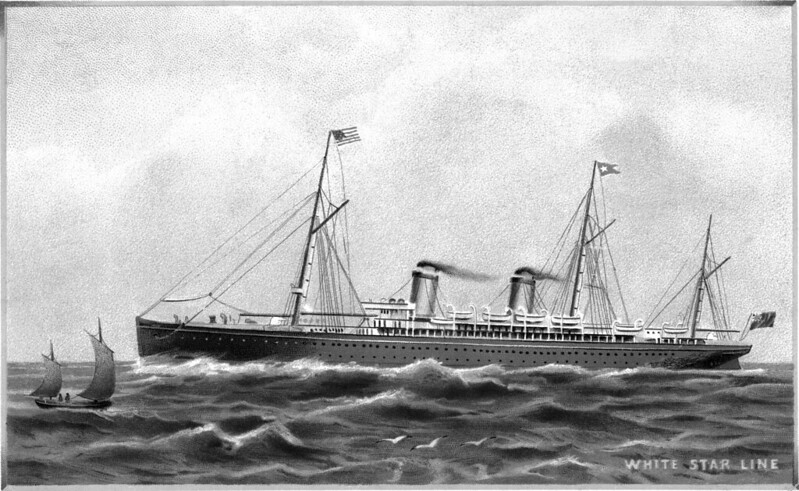 The Ellis Island records show that Oscar, his father, uncle and sisters travelled back to New York from Liverpool on ‘The Majestic’ arriving in the USA on 15 September 1892.

In the 1900 census Oscar was living at 1692 Superior with his father and sister Emma Jean while their married siblings were living elsewhere.

At the time of his marriage  Oscar was living at 30 Bell Avenue, later to become 90th St., that was the marital home for a few years.  It looks as if John was trying to teach Oscar all aspects of the barrel making machinery business as for a while Oscar was a bookkeeper, then a buyer before finally becoming a ‘supt’ that probably stands for ‘superintendent’.

Between 1904 and 1907 Oscar and Maude made their next and only house move to 1896 E 86th Street, the address given on Oscar’s death certificate. The couple had four offspring,  John Samuel Oram II, Kathryne Belle Oram, an unnamed daughter and Marjorie Verne Oram.  We understand that John Samuel II married and had one child called John Samuel III who had no offspring.  Kathryne Belle married and her descendants are living in the USA in 2012.  Unfortunately Oscar and Maude’s next children did not survive.  The birth of their unnamed daughter was registered as 5 February 1905 then four years later Marjorie Verne Oram was born on 20 January 1909 but died on 12 June 1909.  The notice of Marjorie death ran: Oram-Marjorie Verne, age 4 months and 22 days, beloved daughter of Oscar T. and Maude Lossey Oram, Saturday, June 12, 8:30 p. m. Funeral from the residence, 1896 E. 86th st., Monday, June 14, at 2 p. m.

In 1913 the family’s life would have changed when Oscar’s father suddenly died while visiting his sister in England.  Oscar’s sister Emma Jean became President of John S Oram & Co, his uncle William Clark was Vice-President, his brother-in-law William Keim treasurer and Oscar became the Secretary.  As far as we can see they all held these positions for the rest of their lives.

In 2012 the only other glimpse into Oscar’s life is from Elroy McKendree Avery’s 1918 book History of Cleveland and its Environs.

“Oscar T. Oram is a son of the late John S. Oram, and at the death of his father in 1913 became secretary of the John S. Oram Company, where the inventions and improvements of his father in cooperage machinery are still manufactured and distributed to the world. Oscar T. Oram was born at Cleveland January 29, 1878, and grew up in a home of high ideals and with every incentive to a life of effectiveness and purpose. He attended the grammar and high schools of Cleveland, until the age of sixteen, and then went to work as a machinist’s apprentice in his father’s shops. He gained experience both in the technical and business side of the industry, and in 1907 was made superintendent of the factory, responsibilities which he carried until he took up his present duties Mr. Oram is independent in politics. In August, 1902. he married at Cleveland Maude Losey. They have two children, John Samuel and Kathryn Belle.” 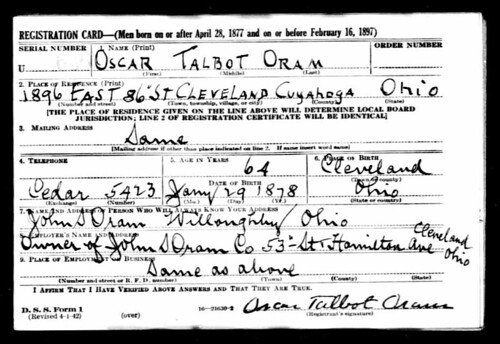 Oscar’s WWII draft card.
The image of his is WWI card is not shown as it is almost illegible

Maude continued to live at the family home until she died in 1953.