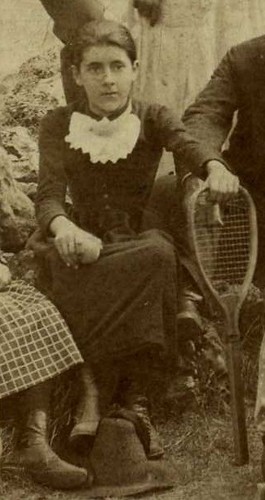 Marriage 2 and 3: No offspring

In 2012 we have left the text of Lillian’s entry as it was written by our mother Daphne in the late 1960s in The Oram Family Saga.  We have added images of an interesting newspaper cutting and Lillian’s three marriage certificates with notes on her spouses plus the photograph of ‘Aunt Jemima’.

Lillian was the first of their daughters to marry. In 1899 she married Robert Sheal. (10 Orams attended her wedding). Lillian and Robert had one daughter, Jane. This marriage only lasted about 8 years.  Lillian married twice after this, first to William Caldwell who died in 1912 and then William Harman. 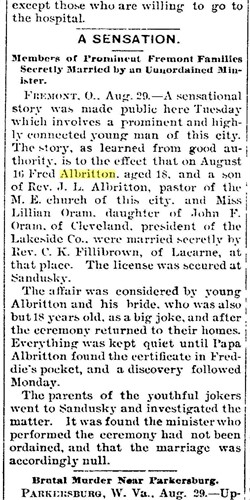 Her daughter Jane says of her parents, “Mother was a gay blithe spirit who needed to be cherished. Dad was totally engrossed in his work, a genius in his particular field of engineering and inventions. But he could lose himself in his work. It was nothing for Dad to work eighteen hours a day seven days a week, while Mother sat at home alone wondering and worrying. His particular work at that time was supervising the installation of loading and unloading equipment for iron ore and coal and so many workers feared they would be replaced. Threats and beatings of the installation crews were frequent. Dad never gave it a thought, too wrapped up in his work, and totally devoid of fear”.

In later life she lived with her daughter Jane at the Mansion when her son-in-law was Governor of Ohio. 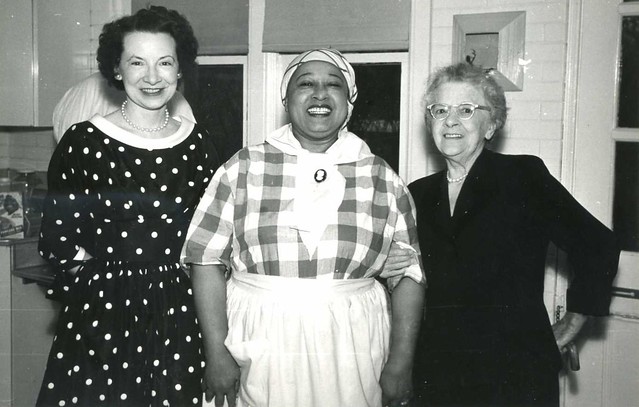 Jane Lausche (nee Sheal), Aunt Jemima and Lillian Harmon (nee Oram) in the Ohio Governor’s Mansion Kitchen, sometime between 1945 and 1956 when Frank Lausche was Governor.  Jane told Carolyn that she was disappointed that this photo had not been included in the original ‘Oram Saga’; but Daphne being a Brit would not have known that ‘Aunt Jemima’ had been a famous marketing image since 1890s.  The Quaker Oats Co. who have owned the brand name since 1926 have hired various women to promote the range. This ‘Aunt Jemima’ was particularly popular so Jane was delighted when she persuaded her to cook a dinner at the Governor’s Mansion.

Lillian was always lively and firmly remained 63 years old long after she had passed that birthday. (Once during an operation the doctor asked her how old she was and three times received the firm answer – 63).

Oram-Caldwell Marriage License (note mother’s name Jane Clarke). William Caldwell was divorced and an attorney at law. He was born in Louisville, Kentucky, son of machinist John Caldwell and Henrietta Tonks, both had been born in England. In 1910 census the couple were living at 9011, Hough Ave with Lillian’s daughter Jane. William died on 25 Jan 1912 and was buried on 27 Jan in the Oram lot at Lake View Cemetery.

Lillian-Harman Marriage License (note mother’s name Jane Cox). It looks as if this marriage may have ended in divorce.  In the 1920 census Lillian is with Jane and in 1930 she is living alone, both times describing herself as a widow.  At the same times an accountant William Harman was living at the Cleveland Hotel, described as married in 1920 and divorced in 1930. This William died on 10 Feb 1931 and was buried in the Catholic Calvary Cemetery in Cleveland. His father Thomas had been born in Ireland and his mother Mary Skinner in New York State of German parentage.