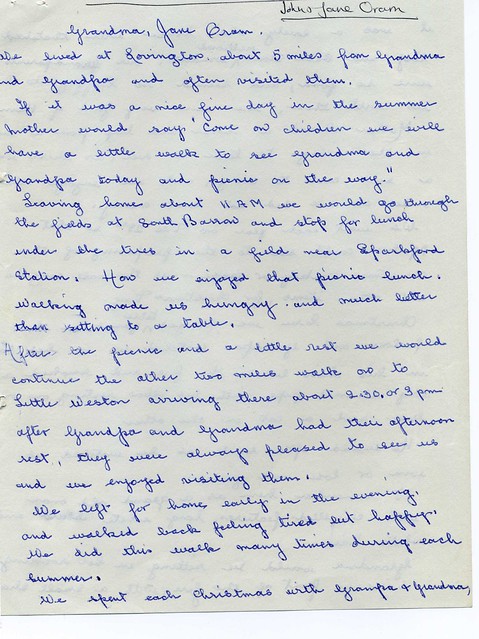 We lived at Lovington, about 5 miles from Grandma and Grandpa and often visited them.

If it was a nice fine day in the summer, mother would say “Come on children, we will have a nice walk to see Grandma and Grandpa today and picnic on the way.” Leaving home about 11.0 a.m. we would go through the fields at South Barrow and stop for lunch under the trees in a field near Sparkford Station. How we enjoyed that picnic lunch. Walking made us hungry and much better than sitting to a table.

After the picnic and a little rest, we would continue the other two miles walk onto Little Weston, arriving there about 2.30 or 3.0 p.m. – after Grandpa and Grandma had their afternoon rest. They were always pleased to see us and we enjoyed visiting them.

We left for home early in the evening, and walked back feeling tired but happy. We did this walk many times during each summer.

We spent each Christmas with Grandpa and Grandma – it was a lovely old house with thatched roof and Bath stone mullioned windows. Our grandparents were so good and seemed so happy to have us with them. We were very fond of them.

Mother hired a horse and trap from a man in the village to take us over, as there was a suit case to carry and we enjoyed this ride as we did not have many. We went each year on December 23rd, so that mother could see to the preparing of the Christmas turkey or goose – as the case may be – and other items for Christmas day. Christmas Eve we played table games in the parlour and Grandpa watched us as he sat in his chair beside the fire, and smoked a long-stemmed pipe with his elbow resting on one knee and a cat on the other. He would often smile as he watched us win or lose our games. I remember him as a grand old man with chiselled features, long white beard and white hair.

Grandma would be sitting in her rocking chair in front of the fire, with a small shawl on her shoulders and a fancy lace cap on her head. She had lovely brown eyes, dark hair and most of her own teeth – no false ones at 70 years.

I understand she was a pretty woman when young and very good-natured in every way, making and sending special dishes to anyone in the village who was ill or in need.

Grandma usually went to bed early, but not so on Christmas Eve. Ciss, Jim and self were sent before her, and I understood when I was older, why she stayed up later that special evening – it was to take our short stockings off the bedsteads where we had put them for Father Christmas and put long big light grey stockings full of good things such as fruit, sweets, dates, figs, oranges, etc., in their place; and with mother, put all our presents hanging on the bedstead. It was a wonderful sight for us when we woke up. Jim would run into our room to show us what Father Christmas had brought him – and we would show him our presents. I think Grandma, Grandpa and mother were as pleased to see our enjoyment as we were to have so much love shown us.

After breakfast, I went into the kitchen to see the big log fire on the “dogs” which made a lovely glow, and the big pot with a long handle on a chain hanging from an iron rod up the big chimney, which I think they call a chimney-hook – this pot was for the Christmas Pudding. Beside it was a large kettle hanging from another hook. Before the big fire was the turkey in a Dutch Oven, and when one side was cooked, the oven was opened on the other side and that was then cooked. The vegetables, etc., in other pots, hung over the fire.

I often wondered how Annie managed to make the toast for Grandma’s breakfast – which she had in bed – so quickly after lighting the fire. But one morning I was downstairs early and found when she lit the dining-room fire, which was one with bars, she put a few cinders between each bar so they would get red hot quickly, put the bread on a long-stemmed toasting fork which was soon nice and brown. How thankful we, of our generation, should be for the modern appliances we now have.

Grandma made different kinds of wine – such as Elderberry, cowslip, parsnip, etc. Also a lot of jam and jelly from the fruit in the garden, with the help of Annie. She also made an ointment which was very good; as I well remember when I was a little girl and fell down cutting my hands and knees on roads or stones. Mother would put a little of Grandma’s ointment on the wound, soon stopping the pain and curing the cut.

When Grandpa was old he could not get up into a trap very well because of rheumatism in his leg and back, so he had a small four-wheel carriage and a donkey to take him to Sparkford, or for a ride round the villages with Grandma. He brought Grandma over to see us at Lovington and when he could not come, Annie would drive Grandma over to us for the day and then visit her parents who also lived in Lovington and return to Grandma in the evening, harnessing the donkey to the carriage and trot off to Little Weston. The donkey had a good feed of grass all day in the yard belonging to our house, which was the Dairy House – Grandpa let the cows to a dairyman when at Charity Farm and mother let grass grow over the yard, so Whisky, the donkey, enjoyed the nice fresh grass.

When I was ill from a chill I caught soon after I went to Yeovil, the Dr. said I had to be wrapped in cotton wool, and stay in bed for three weeks – so, of course, I went home to Little Weston.

Grandma was very kind and came into my bedroom and cheered me up, especially on my 16th birthday which was a few days after I was sent to bed. She stayed with me most of that day.

When Grandma was taken ill with a stroke, mother thought it best for me not to come and see her, but to remember her as she was when I last saw her. Neither of we children went to her funeral, as mother thought it would upset us and would not help others.