It was not until we saw a transcript of Gilbert and his daughter Jane’s death certificates that we had an insight into the family’s Scottish roots.   Gilbert was born in Glasgow, in 1825 son of J. and Mary Clark.   We do not know when and where Gilbert married Jane Robison, or maybe Robinson but their daughter Jane was born in 1846 in Dumfries, Scotland.  So looking back to the start of the family’s life there should be a Gilbert Clark living in Scotland during the 1851 census who was married with one or more children who was not in Scotland for the 1861 census. No suitable candidates could be found in 2012, so we can only go forward to their first known home in Ireland.

John Oram 1824-1907 made a note in his diary on 25 June 1860 that “Gilbert Clarke [sic] came to Derredda”.  Derredda is close to Burrishoole Abbey near Newport, County Mayo, Ireland.  There Gilbert was the stockman on Captain Wyndham’s estate. On 10 October 1861  Gilbert took a mare and five bullocks to England.  Later John Oram  noted on 22 November 1864 “Gilbert Clarke [sic] left Ireland for New York” .

Map of West of Ireland where Gilbert was a stockman

For a more extensive interactive map of the extended area, please go here.

Gilbert Clarke [sic], his wife Jane and child William are included in the list of passengers travelling on the ship ‘David’ out of Liverpool that arrived in Portland, Maine, USA on 20 December 1864.   Their daughter Jane was not with them and we have no way of discovering if Jane had been living with them in Ireland.  Jane may have been the 20 year old  passenger ‘Jane Clark’ who travelled alone on the ship ‘Britannia’ that sailed from Glasgow, Scotland to New York, USA, arriving 26 May 1865.

The family would have been surprised when John Oram’s son John Samuel Oram 1847-1913 joined them in Cleveland in 1867.  John Samuel had broken his apprenticeship in Scotland and was liable to be imprisoned so his father put him on the next boat out of Westport, Co. Mayo, Ireland that helped him escape to the USA.

John Samuel Oram married Jane, daughter of Gilbert and Jane on 7 December 1867 in Cleveland and from then on the two families became a mutually supportive extended family. The Cleveland directory records are invaluable for charting their movements between the once every ten year censuses. 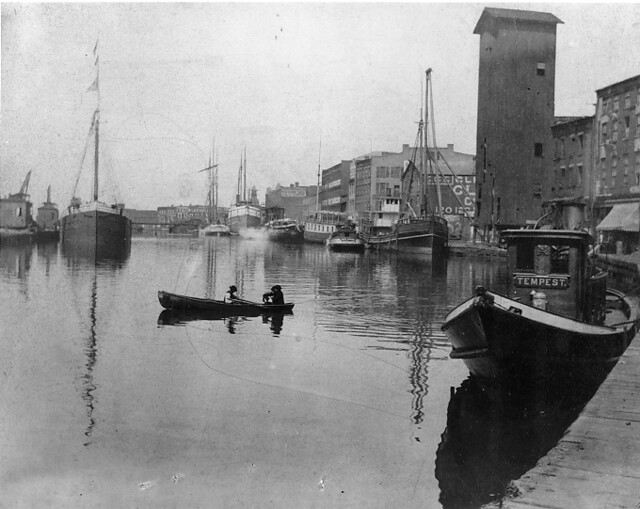 A view of the Cuyahoga River, looking north from the riverbank at Superior Ave., 1870 (a stone’s throw from Spring Street). Source: Encyclopedia of Cleveland History 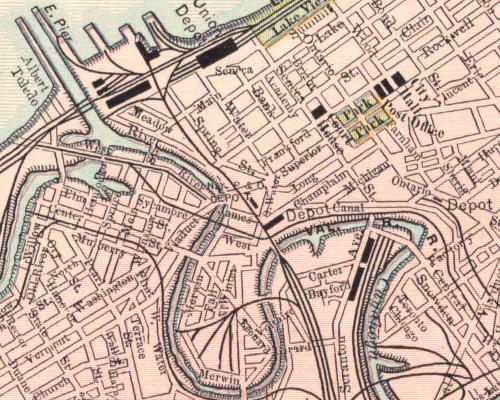 Map of area near Spring Street

In the late 1860s the Clark and Oram families lived in Spring St that ran north-south, close to the docks and one block east of the Cuyahoga River. See image above. It is interesting to compare this image with one included in the Cleveland Memory Project, taken a block closer to the port.

In the 1870 census we find that Gilbert and his wife Jane and their 8 year old son William were living on a farm at Newburgh, four or five miles south of the centre of Cleveland while the Orams were living in downtown Cleveland.

In 1872 and 1873 Gilbert and John S Oram were working at HA Crossley, a manufacturer of wooden shingles for roofs. By 1873 both families had moved to away from the dock area to Lyon Street that would have then been on the outskirts of Cleveland.  The directories show Gilbert living at 5 Lyon and John S Oram at 11 Lyon with Gilbert adding in 1877 that he was employed as a ‘helper’ at John S Oram’s machinery business Oram & Atherton.

By the time the 1878 directory was compiled Gilbert had joined the Oram family at 11 Lyon.  On 8 March 1879 Gilbert’s wife Jane died of ‘dropsy’, so no doubt the family decided to live together enabling Jane’s daughter Jane Oram to nurse her mother.   This move would have also freed up cash for any medical expenses.  On 11 March 1879 Jane was buried in the ‘single section’ in the eastern side of Woodlands Cemetery near her grandson Charles C Oram who had died in infancy in 1869.  This probably indicates that in 1879 the family did not have the financial resources to establish a family lot, but they did when Gilbert died nearly twenty years later in 1898.

Jane Clark, burial record. From: http://wcfcle.org/interment/wcfiis_namelist.php Note that the address: 11 Lyon St establishes that this is Gilbert’s wife.

Gilbert was a labourer until he was sixty years old. After Jane died he always lived with the Oram family, as in the 1880 census, or with his son William and his wife Anna.

Gilbert died on 17 July 1898. The notice in the local paper ran: Clark-Gilbert, Saturday at midnight, at the age of 74 years, at the home of his son, William Clark, No. 177 Dana st. Funeral Tuesday at 2 p.m. Friends invited.  Gilbert was buried in Lake View Cemetery, establishing the Gilbert Clark Lot in Section 2 Lot 26-0 of the cemetery where all his descendants have been buried.