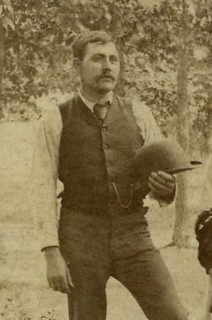 Marriage 2 and 3: No offspring

William, son of Scottish Gilbert Clark and Jane nee Robison Clark was born in Ireland in 1862 and emigrated to Cleveland Ohio USA in 1864. As a young child he lived in Spring Street close to the river in downtown Cleveland and, at least during the 1870 census on a farm in Newburgh, four or five miles south of the centre of Cleveland.

The Oram family oral tradition is that “Jane’s brother William who was an excellent mechanic helped John in those days” that is during the time that John was developing his barrel making machinery business. In fact John and William may have been the company’s Research and Development team as after John died in 1919 William became Vice President of John S Oram & Co, a position he held for many years. We were surprised when researching the directories by the senior positions that William played within John S Oram & Co, because Daphne’s sources in the 1970’s had not told her about this strong Clark family involvement.

In 1883 William married Anna Durgetto, one of the daughters of florist Gottliebe Durgetto who lived at 1083 Superior. Their son Arvin Chester Clark was born in 1884.

During the late 1880´s William became a naturalized citizen of the USA.  Different dates are available depending on the source so until we can view William’s record from the Probate Court of Cleveland we are giving the date as c1888.

By 1887 William and Anna had settled at 177 Dana, now 61st St NE between St Clair and Superior with William’s father Gilbert who lived with them until he died in 1898. Dana St ran parallel to Lyon Street where William had lived with the Oram family. At that time the John S Oram & Co works were on River, now 11th St W on the other side of town. By 1892 the works had been relocated to Hamilton and Coe, now 53rd St. about five blocks away from Dana.

When John Samuel Oram’s son Arthur Oram 1872 – 1934 married Anna’s sister Josephine Durgetto in 1893 the couple lived at 177 Dana for a while. All the documentary evidence supports the oral tradition that ‘Arthur was a kindly ‘rover’ who loved his liquor’. In the 1900 census Josephine and her daughter Nathalie were living with William and Anna at 177 Dana; no sign of Arthur.

During the 1910 census William and Arvin were living in rented accommodation at 1403 West 65th St. William described himself as a factory manager and Arvin, who the enumerators described as William’s wife, was an office clerk.   Arvin married Jesse May Siegle on 28 January 1911.

A fortnight later on 11 February 1911 William married widow Pauline Rose Vouwie nee Winkler who had been born in Ohio in 1867. Her parents Joe and Marie Rose Winkler were of German speaking Swiss extraction who had been in the USA since 1866. William lived with Pauline and her mother at 5806 Clinton, the house where the two widowed women had been living at the time of the 1910 census.

Pauline died the next year on 4 March 1912 and was buried in Gilbert Clark’s lot in Lake View Cemetery. The family placed the following notice in the local paper: ‘Clark-Pauline, beloved wife of William Clark, daughter of Mrs. Rose Winkler, Monday, at 12:30 a. m., at her residence, 5806 W. Clinton. Funeral Wednesday, at 10 a. m., from late residence. ‘

The following year on 9 June 1913 John Samuel Oram died of heart failure while he was visiting his sister in Ilfracombe, Devon, England. John’s ingenuity and entrepreneurship had taken the Oram and Clark extended family from an also-ran immigrant family to one that was respected in Cleveland. John had been a director of a bank and his philanthropic activities included supporting the YMCA. As a mark of love and affection the family repatriated John’s body so that he could be interred in Lake View Cemetery.

John’s daughter Emma Jean Oram became President of the company, William became vice-President, John’s son Oscar Oram Secretary and John’s son-in-law William Keim Treasurer. The company seems to have continued to flourish as over the next decade William and the Keims moved to the prestigious Shaker Heights part of Cleveland.

There is no sign of William’s certificate of marriage when he married Marie Masche 1882 – 1942 on 10 Aug 1917. Their wedding date was found in their 1925 passport application form. Marie had been born in 1882 in Ohio, daughter of immigrants from Prague, now capital of the Czech Republic.

William applied for a passport because he intended to go to Italy for ‘commercial business’ in April 1925. William and Marie are included in the SS Celtic’s passenger list when they docked at Boston 22 August 1925 en route from Liverpool, England to New York at the end of their European trip.

William and Marie also went to Europe in 1931. We have not found documents for their outward journey but they returned separately, both on the SS Belgenland from Antwerp to New York. William arrived in New York on 28 April 1931, whilst Marie arrived in New York on 21 June 1931. Perhaps she was able to visit her relations in Prague.

During the 1940 census William and Marie were still living at 2870 Woodbury Rd, but not with Marie’s mother, who must have died sometime in the 1930s. Marie died on 6 May 1942 leaving William a widower for the third time. Three days later Marie was buried in Knollwood Cemetery, rather than in the Clark lot at Lakeview Cemetery. The newspaper notice ran: ‘Clark: Marie (nee Masche), beloved wife of William Clark, at her late residence, 2870 Woodbury rd., Shaker Heights. Friends may call at Abel’s Funeral Home, 15333 Euclid ave., near Shaw, where services will be held Saturday, May 9, at 2 p. m. ‘

Just over a year later William died on 1 Apr 1943: “Clark: William, beloved husband of the late Marie, father of Arvin C., grandfather and great-grandfather, at his residence, 2870 Woodbury Rd.” and was buried in Gilbert Clark’s lot in Lake View Cemetery.