Died: 1 Jan 1890 in Cleveland, Ohio, USA. Jane was the first person to be buried in the Oram lot at Lake View Cemetery, Cleveland

Daughter of Mr. and Mrs. Gilbert Clark, born in Scotland, who managed the livestock on one of the farms run by John Oram in Co. Mayo – On November 22nd 1864 the family emigrated to the U.S.A.

Wife of John Samuel Oram, mother of Arthur, Oscar, Ida, Emma, Jean and Lilian Louise. She visited England in May 1887 with her husband and son Oscar and stayed at Lovington.

We have a cutting taken from a magazine after her death which reads:

“Mrs. Oram, the beloved wife of J.S. Oram, who is one of our managing committee, died New Year’s evening January 1st 1890. In the death of Mrs. Oram the community in which she lived and was known will miss her very much. Mrs. Oram had the combined qualities of making herself agreeable to those whom she met, whether stranger or friend. As a Christian worker among young men, Mrs. Oram’s personal work in the after meetings, and as other opportunities presented themselves, will stand as an example, though she has gone before to beckon them on. She will be watching and waiting as they will go home, one by one, we can only say: ‘The Lord giveth and the Lord taketh. Blessed be the name of the Lord’”. 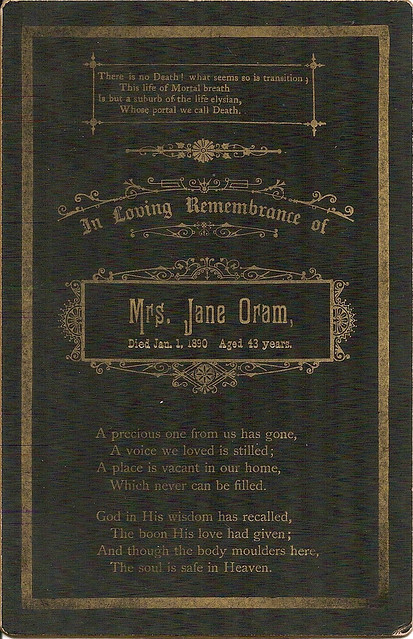