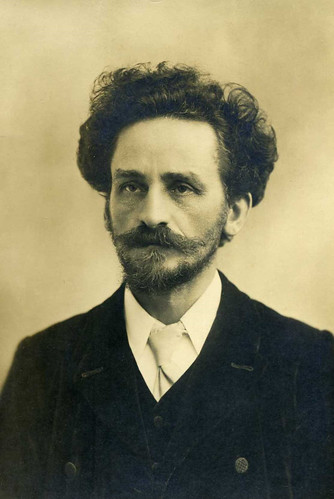 2013 note: There is no clear set of census records for James Allen before he married Lily.  Information in the  links at the bottom of this page is probably an interpretation of census and birth, marriage and death certificates.

James Allen was born in Leicester on November 28th, 1864. His father, William Allen, was then a prosperous manufacturer, but in 1879 his business failed. He decided to emigrate to America, hoping to make good his losses and to prepare a home for his wife and younger children who would follow him later, but within hours of arriving in New York, he was robbed and murdered. This crisis placed a heavy burden on the shoulders of James Allen who, at the age of Fifteen, had to leave school and seek employment in order to contribute to the support of his mother and two younger brothers.

When he was twenty-four, James Allen left Leicester and went to London and later to South Wales, earning his living by journalism and reporting. It was while he was in Swansea that he met his future wife, Lily Louisa Oram, who was then working as a missioner in the Bible Christian Communion and was preaching a course of sermons in Swansea. After a short engagement, they were married on May 22nd 1895. Shortly after their marriage, they moved to Weymouth, where their only child was born in 1896.

About two years later, James Allen came in contact with Sidney, founder of the Order of the Golden Age and a convinced vegetarian. Under his influence, both James and his wife became vegetarians. Sidney Beard, who was then living at Ilfracombe, offered James Allen the post of private secretary, which he readily accepted. The Allen family then left Weymouth for Ilfracombe which was to become their home for the greater part of their lives. There was, however, one short break in their life in Devon, when, after two years James Allen left the employment of Sidney Beard and became private secretary to Mr. Harbutt, inventor and manufacturer of Harbutt’s Plasticine. As a result of this, the family went to live in Bath. Here James Allen wrote his first book, “From Poverty to Power”, followed by “All These Things Added”. About this time he undertook the editorship of a newly founded magazine “The Light of Reason”. On this account, he resigned his secretarial post in order to devote all his time to writing. It now being no longer necessary to remain in Bath, in 1903, the Allens returned to Ilfracombe and here, during the next nine years, James Allen wrote the remainder of his nineteen books. Of these, his third “As a Man Thinketh” is the best known and has been the most widely read and still has a large reading public, particularly in the U.S.A. The magazine “The Light of Reason” had passed into his hands about this time and he continued to publish it until his death. Shortly before his death, he changed its title to “The Epoch”.

Never a strong man, his health gradually failed and he died on January 24th 1912.

As can be inferred from his books, James Allen was a deeply religious man, though he was not a member of any church or sect. In a letter written to his brother George, he speaks of Our Lord as “the Master whom I have so long inwardly worshipped and humbly tried to follow”. He studied Eastern religions and was greatly influenced by Buddhism. He wrote from his own experience and his books were the result of hours spent in meditation. Every day he rose early, sometimes before dawn, and walked to the Cairn, a hill near his home, and here he spent an hour in meditation. His writings stress the power of the individual to form and purify his character by the control of his thoughts. So he drew the inspiration for his famous book from the words “As a Man Thinketh in his heart so is he.”  He did not write for fame or monetary success and therefore he did not copyright his books in the U.S.A. This contributed to their being widely published in that country, but brought him no remuneration.

He lived a quiet, simple and ascetic life. His hobbies were gardening and taking long country walks. He enjoyed the company of friends and there are a few still living who recall with pleasure happy evenings spent in his home.

Physically he was rather frail looking, not very tall, with curly dark brown hair, worn a little longer than was customary at that time, though not long by present day standards.

In accordance with his wishes, he was cremated at Leicester and his ashes scattered to the winds. He wished for no grave or memorial. 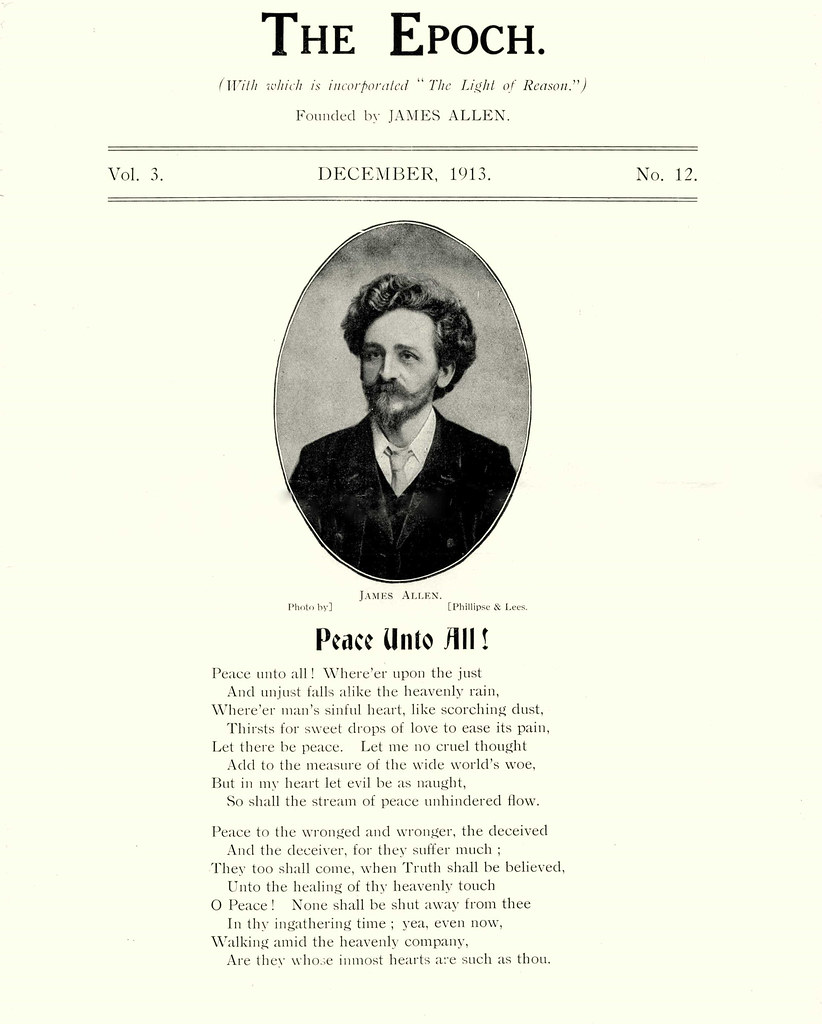 Edition of The Epoch about a year after James’ death.  Picture of James with first half of a poem ” Peace Unto All ! ” by James. For the second half of poem see his daughter Nora Allen’s page.