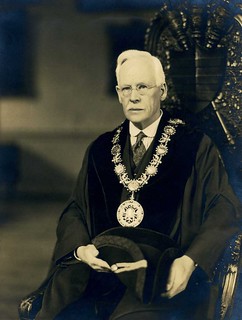 Alfred Hinxman as Mayor of Salisbury, 1930

Born March 16th, 1866 at Salisbury, eldest son of James and Marie Hinxman. Educated at the British School, Salisbury. Apprenticed to the grocery but later became a clerk in the firm of F. Bird & Co., coal merchants. Went to Devizes as a depot manager of the firm. Married Emma Agnes Oram in 1893 and had 5 children (one dying at birth). Returned to Salisbury in 1909 as Managing Director of the firm. In 1914 he acquired the Salisbury and Devizes depots. He was actively interested in church life as a Methodist (at connexional level), in the Coal Merchant’s Federation (as county chairman) and in municipal life as councillor, alderman, chairman of the housing and city lands committees and mayor in 1930. He served for many years as a J.P. A serious illness in 1942 ended his active career. He lived in retirement till his death in 1950.

He had many endearing characteristics. The main one, perhaps, was the pleasure he found in knowing and enjoying other people, his own family, his children, grandchildren, his wife’s family, his children’s friends, his colleagues on the City Council, his friends at his church, at the London Coal Exchange, all Methodist Ministers and the “men in the yard”. He loved making gifts. His children remember the interest he infused into everything he did with them. The long walks he took them, the games he played with them, and the coaching in catching balls. The last 20 years of his life were enriched by his love of his grandchildren.

He was an early and enthusiastic motorist, undeterred by continual breakdowns which landed his family into strange adventures. He loved making gardens and was always slipping down to his son’s farm to put in plants, or filch another corner from the yard or paddock to accommodate his shrubs. The weightier duties of business could always be forgotten for the pleasures of taking someone for a ride and he could always put off till tomorrow what he should have been doing today. His fine head and stature gave him a certain dignity which was never so noticeable as when he was walking in solemn red-robed procession with his fellow-councillors.

Alfred’s daughter Lily and James Oram were the main sources for this entry in ‘The Oram Family Saga’ compiled by Daphne Oram in the 1970s. 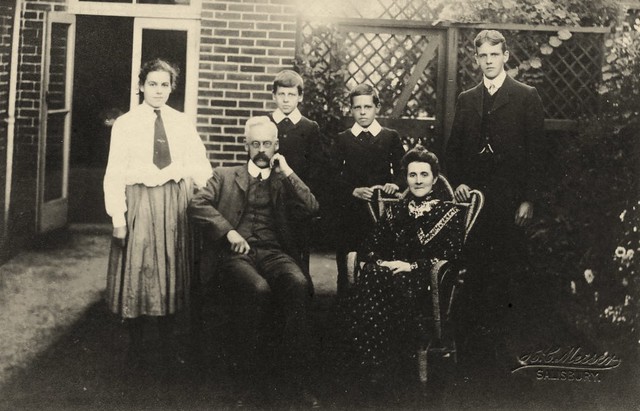 The following entry was written in the mid 1980′s by Winifred ”Winnie” Hinxman nee Bulter at the request of Richard Hinxman and is reproduced here with Richard’s kind permission.

In Salisbury, my father-in-law Alfred Hinxman was apprenticed to the grocery trade.  Because of this, he always tied up all parcels most beautifully.  This was a family joke: “Of course – he learnt it in the grocery trade!”

Why he switched to the coal trade, I don’t know, but he became a clerk in the firm of F. Bird & Co., Coal Factors & Merchants.  In 1892 he was married, & was sent to Devizes as Depot Manager for F. Bird & Co. there.  All his children were born there: he was there for seventeen years, and he was on the Town Council there from 1905 until 1908.  Alfred was in Devizes for many years, entered life in all aspects of the running of the town, and was very much liked.

In 1909, Alfred returned to the Bird & Co. business in Salisbury as Managing Director there, upon the death of the manager.  In 1912 or 1914, he acquired the Salisbury and Devizes depots.  The Devizes depot, managed by his wife’s nephew James Oram, was always run as A. Hinxman & Co.  So Alfred rose from managing a coal business, to eventually owning two: one here in Salisbury, & one in Devizes.  In Devizes, Alfred was also in partnership with the Rendells in a brickyard: the Devizes Brick & Tile Co.  He always enjoyed going back to the town he had known so well.

In Salisbury, Alfred was very interested in municipal affairs, and enjoyed public work.  He was elected to be a Member of the City Council in November 1919, & later an Alderman of the City Council.  He served on many committees, e.g. Finance, and was Chairman of the Housing & City Lands Committee.

In 1930, Alfred became Mayor of the City of Salisbury.  In his year of office, Stanley Baldwin (the Prime Minister) came to Old Sarum, to unveil a site marking the Parliamentary Tree (whatever that is?).  A toll-gate was also removed at Scammells Road (I think we had to pay 1d. to go through on foot), which linked one side of the town to the other.  A stone was laid, to commemorate the start of building 50 houses on the Pembroke Park Estate (Council houses, I imagine).

Alfred also inaugurated the hanging of baskets of flowers, from lamp standards & other central parts of the town – an idea he borrowed from Devizes.  He was a great lover of flowers and trees, and was Chairman of a committee dealing with open spaces.  He supplied trees & shrubs for planting on the Harnham Estate, & on Mill Road.  The ones which remain today are on the Devizes Road, which improve that entrance to the city.  He belonged to an organisation called “Men of the Trees”.  Does it still exist I wonder? – you would know.

In March 1935 Alfred was appointed a Magistrate for the City and remained one for many years.  Alfred was also County Chairman of the Coal Merchants Federation.  He very much enjoyed taking a trip to London every Monday to go to the Coal Exchange, where he had many friends.

Alfred followed his father, in his active interest in the Methodist Church.  He was Senior Circuit Steward, and Treasurer for twenty-seven years.  He was also interested in two Methodist schools in North Devon: Shebbear College, & Edgehill College (of which he was a Trustee).

His family was three boys and one girl (we have now got to where I am involved).

In 1942 Alfred had a very serious illness, and had to retire from all public work.  His only daughter Lily came home then.  She never returned, but helped her mother look after her father until his death in 1950.