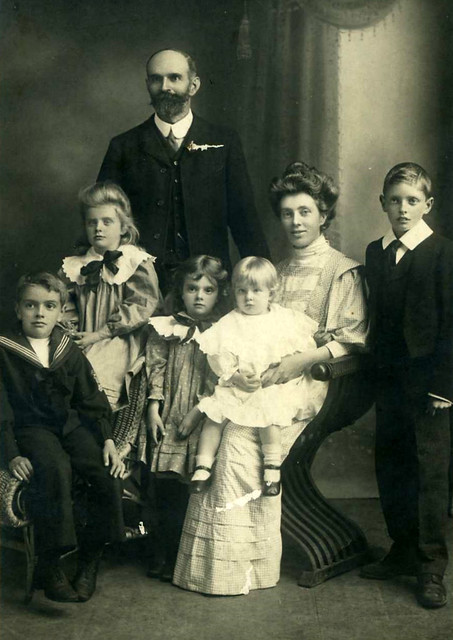 Alfred and Jane Oram with their family circa 1907

On 14 August 1897 Alfred’s brother Arthur made the entry in his diary “to Alfred’s wedding”. He stayed at Ulster Bank House in Enniskillen for a couple of nights and went “to Ballyshannon introduced to the Green family”. On the 18th “Alfred married in Ballyshannon to Miss Green .. I drive with Revd Messrs Green, Mrs Alfred’s uncle and brother and to Bundoran…”

There is a baptismal record for a Jane Finlay Green born 29 October 1868 in Ballyshannon to Mary Jane Monds and Andrew Green that ties in with Jane’s 1901 and 1911 census returns. Unfortunately in 2012, the civil marriage records for the third quarter of 1897 were not available so it has been impossible to verify that Jane’s father was Andrew Green and an estate agent (land agent?) as he is described in Alfred’s entry in the Saga. (CJO: we now know he was a coroner not an estate agent, but the date of marriage is correct)