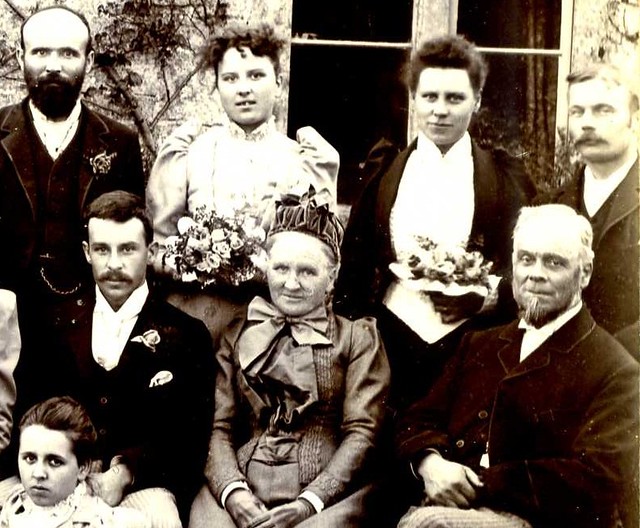 The birth-death dates of James Hinxman’s relations were supplied by Geoff Geier.

The following entries were written in the mid 1980’s by Winifred”Winnie” Hinxman nee Bulter at the request of Richard Hinxman and are reproduced here with Richard’s kind permission.

I understand that the Hinxmans here trace back to James Hinxman, my husband’s grandfather.  He was born in 1835 at West Dean, a little village about 5 miles from Salisbury.  He was a Nonconformist, a Methodist, and I imagine he came from humble country stock.  I only knew him when he was nearly 90, but he was greatly respected.

James was apprenticed to a nurseryman.  He came to work as a gardener to Mr Gregory, a wealthy Methodist miller, who owned the Mill House which gave its name to my road.  It was then a working mill, and the house still stands not more than about 60 yards from me.  It is a beautiful house, with beautiful surroundings: a piece of woodland, as well as gardens bounded by the river – which James Hinxman would have tended.  My own house and that Mill are about 60 yards from Long Bridge, where Constable painted one of his most famous pictures of Salisbury Cathedral.

When Mr Gregory sold the Mill, James Hinxman went with him to a smaller house nearby, where the garden still went down to the river.  When I was married in 1922, that Mr Gregory gave my husband (Ernest Arthur Hinxman) a beautiful drawing room clock, still in good order – a token, I’m sure, of his affection for his old gardener.

My sister-in-law (Lily Edith Hinxman) many years ago, was collecting for one of her many charities (probably Oxfam, or Save the Children Fund).  She called on the present owner, & told him that her grandfather had been gardener there a century or more ago.  He was thrilled to hear the story, and took her all over the estate, & showed her a lovely chestnut tree which her grandfather had planted.

James Hinxman lived to be over 90 years.  He was very much respected in the Salisbury of the 1920s.  I have a picture of him on his ninetieth birthday, with his Salisbury descendants with him, in 1925.  My husband and I had been married in 1922, and we are there with our first daughter, aged one year.

James had five children: 2 sons, & three daughters.   My husband’s father Alfred Hinxman, the eldest son, was born in 1866.  The others were Patty, Ernest, Annie & Ada.  Both of James’s sons built up flourishing businesses: my father-in-law Alfred in Salisbury & Devizes, in coal, and Ernest in Fareham, in cars.  This was entirely by their own endeavours, and by their integrity.  They both had a great capacity for friendship.  They were Liberal in their politics, & certainly showed the best side of the “non-conformist conscience”.

Ernest Hinxman had a very successful motor business, in Fareham.  When we Salisbury young ones used to mix a lot, we used to go under a big bridge which had “Hinxman’s Garage” blazoned across.  People in Salisbury would ask if we were related to the Hinxmans at Fareham.

Ernest was the Austin agent long ago, when cars were coming into use and Austins were setting up.  He himself knew nothing about them, but he sent his son to be trained, and he became his standby.  During the 1945 war, “Young Ern” was on duty with the Fire Brigade, as well as looking after the business.

Ernest had no son, so the family name there has died out.  One of his daughters comes to see me often.