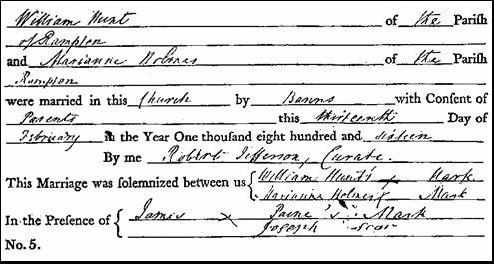 Clearly illiterate, they were married 13 Feb 1816 Rampton, Cambridge, England marking the document with an X. Marriage was announce by Banns, and was with the consent of parents. Witnesses seem to be James Paine and Joseph ??? . William’s trade was scissor sharpening. We see from the censuses of 1841 and 1851 that children came and went from the family home (maybe they were on the road sharpening scissors?). Isaac for instance is not present in 1841 but appears in 1851 age 22. Ages especially Marianne’s are varying with time. Because we have varying numbers of children at census time, we cannot be certain if children are missing (being not present at both census). Number of children in trees varies from 7 to 12. I make it conservatively 8 from the census, but 11 is probably the correct number as a very nice Mormon Memorial,   written probably after talking to her son Isaac, writes (I put my 8 in bold):

They lived in England and were of English descent. There were two political parties in the town where they lived namely the Whigs and the Tories and according to their son, Isaac he thought they belonged to the Whigs. They belonged to what was then known as the Church of England.

The family was not rich and they all had to work very hard to make a living William’s trade was scissor sharpening. He used to go about the streets with his little emery wheel and sharpen scissors.

When William and Mary Ann first heard the gospel of Christ they accepted it at once and began to save money so they could go to Utah with the other Saints.

When Mary Ann was 60 and William was 70 they decided to cross the plains to Utah with the Richard Ballantyne Company in 1855. Unfortunately Mary Ann and her husband died while crossing the plains. Their two youngest sons, Levi, age 22 and Stephen, age 19 who were traveling with them were left to finish the journey without them.

She died 1855 in Mormon Grove, Atchsn, Kansas and was buried in Ft. Laramie, Goshen, Wyoming.

I have a technical issue with this memorial in that I think 3 not 2 of their children finished the journey without them.

The time line from the marriage is:

I am of the opinion that these Isaac didn’t know or acknowledge that his brother Abraham had arrived in Salt Lake City, otherwise it would have been mentioned when he talked about his mother.

None of the other of the 8+ children went to Salt Lake City. So at least three people were probably left in the UK. Here I follow the DR tree as it is the most conservative (least people):

No trace of offspring, he died before the move to Salt Lake City.

No Trace of offspring, but he died in Reed.

They had 11 children born in Reed.

We know of three marriages of daughters which add the names:

Faroway, Todd, Moule to our search for the group R cluster. None of these or Dellow appear at present in these trees. In Dec2019 we now have Dellow in a tree in this group: Valma Dalrymple Managed by Bradley James McKenzie

In addition I feel I must take seriously the 3 names in the memorial to the mother:  Sarah Hunt, James Hunt, & Thomas Hunt

Married Thomas Webb and went to Utah some time between their last child being born in 1859 and 1877, probably after 1868 as they are not listed a Pioneers. She had nine children, 6 survived to be adults in the UK, research is required to find the names of their descendants. I wonder if Thomas is related to Sarah’s grandmother Amelia Webb.

Married Mary Martin and stayed in Hertfordshire dying in Barkway. Mary had six children, but research is required to find the names of their descendants.

Is not in any trees I can find I assume he died young.

Also to find surnames to search for in the cluster I look at those that made it to Salt Lake City, except for Isaac as he is already used in our search. Stephen had zero offspring, Levi 10, Emanuelle 3, and Abraham zero. However the trees do not further list offspring.

First to leave was Isaac (through whom we have DNA links)

Next the old couple and 3 youngest children

Most people in the fourth emigrant company of 1855 were Perpetual Emigration Fund (PEF) passengers who, under Elder Richard Ballantyne, had traveled from Liverpool, England, to America aboard the ship Charles Buck.

No evidence of being Moron Pioneers: